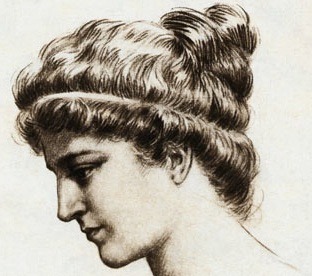 The Person
​
I named my stellar abundance catalog after Hypatia, one of the first known female astronomers who was born between 350-375 AD in Alexandria and died around 415/6 AD (Deakin, 2007).  Hypatia was an extraordinarily strong and independent woman, especially for the time.  She was known to teach publicly from her house, covering astronomy, mathematics, and philosophy, and was highly regarded in Alexandria.  Said Damascius, "In speech articulate and logical, in her actions prudent and public-spirited, and the rest of the city gave her suitable welcome and accorded her special respect."  From Socrates Scholasticus: "She not infrequently appeared in public in the presence of the magistrates.  Neither did she feel abashed in coming to an assembly of men.  For all men on account of her extraordinary dignity and virtue admired her the more."

She worked closely with her father, Theon, on a number of editions and commentaries (seen as a sort of "student guide") on the works of Euclid's "Elements"and Ptolemy's "Almagest."  After his death, she continued her work with her student Synesius of Cyrene, improving on the theories and designs they had established.  While a number of books of hers have been destroyed or damaged throughout the years, much of what is known of the woman and her work are through letters corresponding with Synesius.  From the letters we learned that Hypatia had a hand in designing the modern version of the armillary sphere and astrolabe (to predict the motion of nearby planets and stars) as well as the hydroscope or hydrometer (to measure the density of fluids).

A beautiful and unwed woman, Hypatia was a Neoplatonist who took an oath of chastity and, as a result, was not interested in the many suitors who admired her and her work.  One story -- not for the faint of heart -- described an ocassion when a colleague or student fell in love with her and made his affections known.  She responded to the man by showing him her menstrual "napkin," a clear indicator of her celibate lifestyle, saying, "It is this you love, young man, not beauty."  According to Deakin, "…it makes perfect sense for a Neoplatonist, committed to transcending of the material world, to embrace a lifestyle that minimized her involvement with it."

Humans have a compulsion to keep records and lists and files – so many, in fact, that they have to invent new ways to store them microscopically, otherwise their records would overrun all known civilization.         -- Odo, Star Trek: Deep Space Nine